In February 2019, Karla teamed up with the Free Burma Rangers to go into Syria. As they entered into Syria, I lost complete text communication ability with Karla until when she finished her trip almost one month later.        (Click title to get entire story)

While I didn't know exactly where she was heading with FBR, I knew that Dave and the Rangers would head to the area with the greatest fighting and conflict. As events quickly transpired in February, ISIS's last stand, its final stronghold in Baghouz, was surrounded and under attack from a multinational force. It was here that the Rangers and Karla would likely head.

When Karla materialized from the communication blackout, she confirmed that Baghouz was indeed where they had gone to, and she conveyed some of the most powerful stories regarding forgiveness and loving your enemy that I have ever heard. 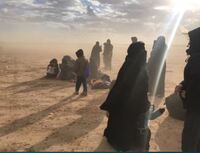 Specifically, FBR was the first relief agency point of contact as people, all hard core ISIS, fled the Baghouz bombardment. FBR was located 1 km (half a mile) from the city, and all sorts of people were showing up: Individuals with amputations, some with parts of their leg still attached. Children with scalp burns sustained from mortal attacks. People had recent gun shot wounds. Four women gave birth in the tents or on the ground at the receiving station. All these and many more the Rangers tended to, providing medical care and giving them food and warm bedding. For some this was their first food in several days.

Loving those cursing you

Interestingly, many of these fleeing Baghouz were shouting down curses as they received their food and supplies. This cachophoney of cries and shouts was overwhelming. The team had hoped to find and provide care to the captured Yazidi women that were made to be sex slaves. To be part of a liberating experience. Instead they were experiencing a hatred unparalleled.

Midway through this, Karla had self taken on the task of scopping and shoveling the poop and feces from the ISIS (refugees). While there were trenches for these activities, the weather was often below freezing at night and almost all just squatted right outside the tents that they would use for a single night before being moved onto one of the internment camps. The health risks to these transcients was mounting, and Karla could not ignore the foul-smelling, pugnacious piles that were increasing every day.

While doing this task for ISIS, the people that were so ungrateful, so filled with cursing day and night to their benefactors, Karla realized that she never would have imagined shoveling the poop of ISIS, an activity that was definitely never on her 'bucket list'.

And yet as she shovelled, and thought to God about how hard this way, God began to download scriptural passages into her: While this was difficult, it compared nothing to the difficulties that Christ endured for us. Yes, Karla had come from America to help these individuals, enduring cold freezing nights. But Jesus had humbled himself even more: he left Heaven and was born in the simplest of situations, a manager, likely filled with plenty of animal feces. And just as ISIS was loudly calling down curses on FBR who was just trying to help them, so Jesus endured cursings, beatings, and even naked shame on the way and upon cross to help the people cursing him, to help us.